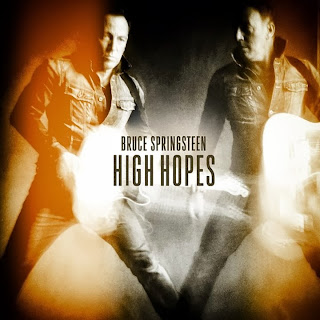 It’s fitting that the album cover of High Hopes features two images of Bruce Springsteen. His 18th studio album feels like an auditory journey through the uncanny. At once, this album is unlike any of his other albums and also unmistakably the work of Bruce Springsteen. The Los Angeles Times recently described Woody Allen’s Blue Jasmine as “both different and the same.” That’s an apt description for High Hopes.

The opening minute of “Harry’s Place” is the type that makes you sit bolt upright in surprise and yet “High Hopes” – a song that he didn’t even write – seems like the kind of song he could have composed in his sleep.

A collection of covers, cuts, and remakes, the album is a curio in Springsteen’s oeuvre. I doubt that it will ever be treasured by anyone as one of his best. And I wouldn’t argue with the detractors who feel that the album is overproduced, but I would say that there are a couple of gems here and a lot of fun to be had.

When you look at an album like this – or a song like “Rocky Ground” – some might regard it as a desperate attempt by Bruce to connect with an audience that doesn’t care about him anymore. But I see it as the work of a tireless creative who isn’t afraid to experiment at a point in his career when he could so easily sit back and rest on his laurels.

I look forward to digesting the album further over the coming weeks but in the meantime, here are a few thoughts track-by-track…

“High Hopes” – I really enjoy listening to the song, but will it have any pop culture relevance?

“Harry’s Place” – The unexpected, Dire Straights-esque sound reminds me of the shock of hearing “Ain’t Got You” for the first time. It’s also notable for adding another two f-bombs to the Springsteen catalogue.

“41 Shots” – I was completely caught off guard when this song began. I greatly prefer the live version, not just for nostalgic reasons but also for its raw power. On this studio version, the emotion feels too removed.

“Just Like Fire Would” – So far, this is my favorite song on the album. I loved his live version and love this, even though it’s weird to hear a song go from live to studio rather than vice versa. Is the studio version overproduced? Probably. But I really like it. It may be a guilty pleasure but it’s great for toe tapping and air guitar in the privacy of your own home.

“Down in the Hole” – A great, quiet song. It strikes me as the best song on the album, but I need to listen to it more to be certain.

“Heaven’s Wall” – I find it very catchy and one of the clearest examples of a song that sounds so different and yet so similar to his past songs.

“Frankie Fell in Love” – One of Bruce’s shortest songs, it sounds old fashioned and reminiscent of The Everly Brothers.

“This is Your Sword” – I find this to be the least remarkable song on the album. Each time I’ve listened to the album, I have no recollection of this song by the end.

“Hunter of Invisible Game” – I’ve been singing the chorus in my head a lot the past few days and I really like the melody. It might become a favorite over time.

“Ghost of Tom Joad” – The one true “remake” on the album. Have any other artists ever remade their own song to this degree before? It’s the smoothest of the live-to-studio transitions in my opinion.

“The Wall” – Along with “Down in the Hole”, this is quiet and understated, but undoubtedly significant.

“Dream Baby Dream” – I’m undecided on this song. I feel like I should love it but it hasn’t caught on with me yet.